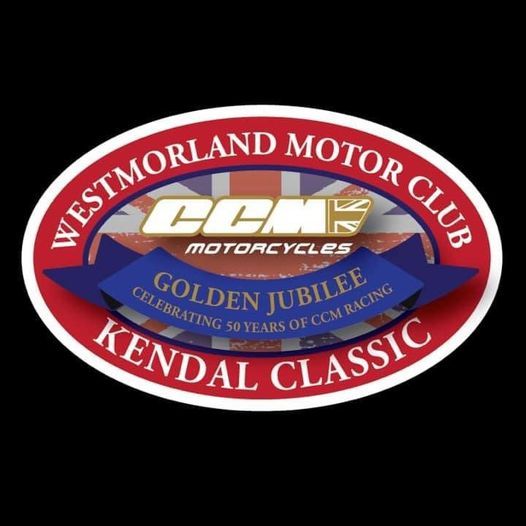 June 26/27 Westmorland Motor Club
CCM Golden Jubilee Scramble at County Show Field, Crooklands, Kendal. LA7 7NH.
The club have just had a new road put into the venue and will once again be using both car parks.
Friday and Saturday campers will be in the main field, with day riders in the field opposite the track.
Entries are still available although some classes are nearly full.
The club are on the lookout for Marshals over the two days, so if you want a ringside seat, please get in touch.
Saturday 26th Classic Scramble for up to Pre-78 bikes plus 125 Air cooled twinshocks.
And including the AMCA / Classic Dirt Bike British Classic Motocross Championships.
Saturday evening will see a concours competition, followed by a marquee, bar and band subject to government relaxation rules.
Sunday 27th will see a host of guests arriving for the CCM Golden Jubilee celebrations, and there will be three guests of honour, who were instrumental at the start of this great dynasty.
Austin Clews, son of founder Alan Clews, Mike Barnes, the very first works Clewstroka rider and former Northern Centre Champion, and hopefully from Switzerland, Ernst Wilhelm Hausler, who has been a CCM dealer from 1971.
Other former works riders hoping to be there include Bob Wright, Andy Ainsworth, Vic Allan, Jimmy Aird, Don Brockbank, Billy Edwards, Perry Leask, Greg Hanson, Wayne Le Marquand, Andy and Ken Nurden, Steve How, Rob Bentham, Steve Tonkin.
The race format for Sunday will be;
Age related Classic up to 1978.
Twinshock – 125, 250, Over 250 All air cooled and drum brakes.
CCM’s Pre-74 & Pre-79. Plus, Twinshock and Mono CCM’s, Armstrongs and JBR’s.
Interval parade laps and Interviews, with Richard Winn and Geoff Shuttleworth.
The Club also host the Bultaco Revival Trial on Saturday June 19 near Holme Farm, Middleton, Sedbergh, and there are two road runs on Wednesday June 23rd and Friday June 25th. Contact Pete Remington on 07891 076320 for the road runs.
Invitation letters will be going out to our guests very shortly
CATEGORY: News
No Comments
0 Likes