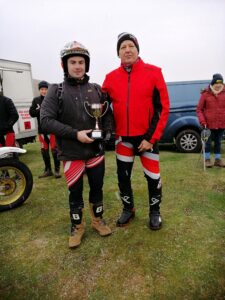 Back in August Paul Norman under the auspices of the Cumberland County MC held a round of the Rockshock Classic Trials Championship  which was formally called the Diane Shield Memorial Trial, in memory of Diane who lost a near two year battle with cancer back in January. Miles Jones was the outright winner of the trial in the Expert class and in recognition of his success, Nick Shield presented him with the Diane Shield trophy at the start of the Bootle Club’s round on the last Sunday of November.

At the same time Martin Gilbert was presented the shield for winning the club’s Northern Classic Experts Trial held the day before the Rockshock round in August. 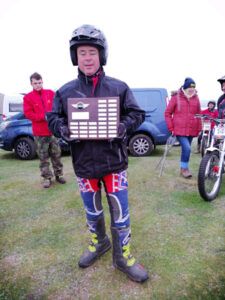