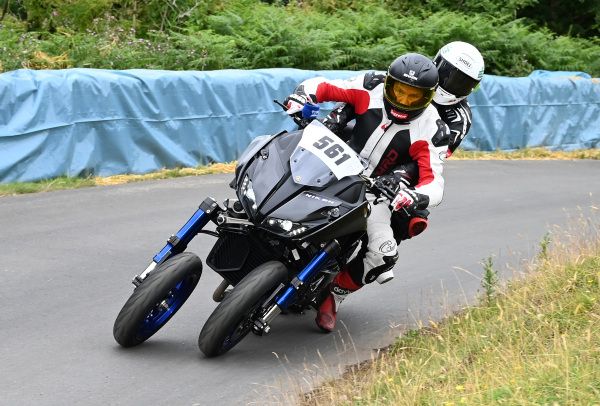 Barbon hill climb, one of the premier speed hill climb tracks in the UK was back in action with bikes after a two year hiatus with the Westmorland Club organising a round of the National Hill Climb Championship.

The event on Saturday July 31, attracted a healthy entry of 94 class rides (some riders had two machines), each enjoying a minimum of two practice runs and three qualifying runs in each of the six classes, which then led to the fastest 20 enjoying a sixth attempt at the hill, followed by the fastest ten and then the fastest five to find the overall quickest man over the 890 yards of Tarmac at Barbon Manor.

It was Barnstaple’s Paul Jeffery  on his stripped to the bone 640 KTM who eventually went quickest with a time of 26.62 seconds which he made during his fastest 20 class topping performance. His final run at the hiill was a fraction slower but still fastest enough to claim the overall. 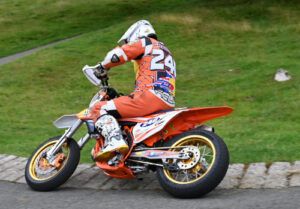 Two local riders, Neil Crayston, boss of D3 Racing and Karl Geary made it into the fastest five reckoning, Crayston taking fourth with a time of 28.19, just three thousandths of a second faster than Geary.

The appearance at the meeting of Mark Forsyth from Performance Bikes on a three wheel Yamaha Niken was an interesting entry as it qualified for both the solo and three wheeler class when his son Adam was perched on the back, grabbing hold of two handholds mounted on the tank. 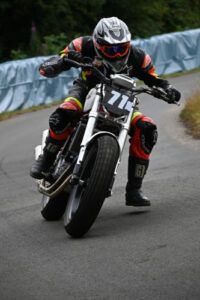 Ben Butterworth who has ridden three Westmorland events over the past six weeks was on his CCM this time to finish 10th in the 750 class at 29.90.

The full results are on the Results page.