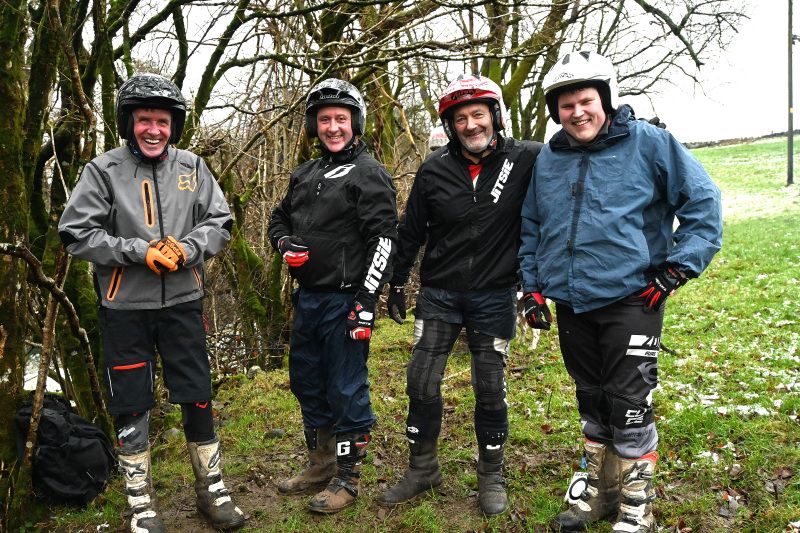 A light dusting of snow greeted the 58 riders who turned up for the Barrow Club’s Boxing Day Trial at The Old Railway Line, Torver for four laps of ten slippery and tricky sections over a fairly hard green course and a clubman route that also included a dead easy version for a small number of riders.

Ace results maestro (available on line at 5.50pm the same night), James Postlethwaite had one of his best rides to date  to win the Green course with the loss of 25 marks, beating Ashley Bell, who was once tipped to be one of the future stars of the Northern Centre until work took him away from the sport for a few years. However he showed that despite the limited time he’s been on a bike over the past decade or so, he has lost little of his ability with some fine  rides for second place, beating Robert Shuttleworth who frequently is the star of events that include a Green course. 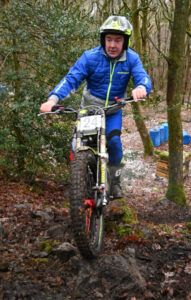 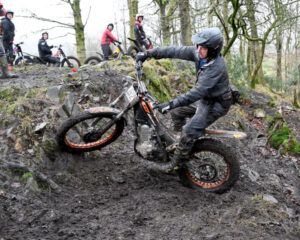 Evergreen Nigel Birkett was forced to retire his special fourstroke Scorpa near the end of the event when it started making worrying noises. But he thought it was worth taking a quick look and found that a valve locking nut had come off, he turned the bike upside down and out it fell. A quick refit with the spanners and Nigel was back in action to prepare for yet another SSDT ride in May – his 44th perhaps!!

With some classy riders tackling the Clubman course, predicting a winner would never be easy with the going so slippery and wet, for the dry morning turned drizzly making the sections more difficult as the day progressed. In the end it was Karl Ratcliffe who proved the best in the conditions. The Kendal man is always a regular in the class but this Boxing Day it was his turn to come up trumps, taking a four mark win over Antony Brockbank and Jonny Clark who was a further two marks adrift. 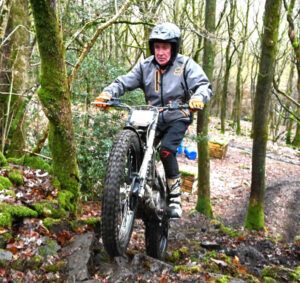 The easy Black course had just three riders taking part with Tony Johnston finishing the day on less than half the score of Ariel mounted Colin Benson, normally one of the course setters for the Lakes GTRC club.

Results on the results page from Sunday, 5.50pm. (Patience, give them time to load.) Kitch pics in the Gallery Monday PM.