Scores proved quite high following three laps of 15 sections at Ghyll Farm, Bowston on the last Sunday of January at the Sedbergh Club’s multiclass trial, an event that attracted an entry of more than 100 riders.

Currently, the sport in the Northern Centre is incredibly popular with many events attracting large entries, generally far greater in number than the club’s enjoyed pre-pandemic. 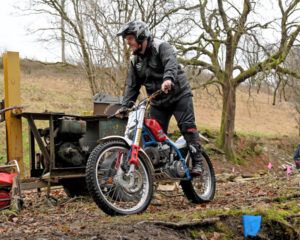 As is usual, the Clubman and Clubman Easy courses featured the largest number of riders but it was over the easy route that the result was the greatest surprise with nine-year-old Cameron Batty on his 80 Beta who proved the best, just managing to finish one mark ahead of three other riders, Peter Blowers, Ritchie Matthews and David Broderick, who were separated in that order by the greatest number of cleans. 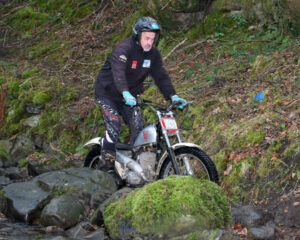 With 16 British Sidecar Championship titles to his name, Robin Luscombe is now an excellent Pre 65 class rider and he added to his catalogue of wins with the top spot in the Clubman class, five ahead of Ben Hanson and a further two behind was Martin Peck.

The 50/50 course of hard and clubman sections was topped by the ever improving Wilf Shuttleworth from Lewis Johnson and Harry Towler while once again Darren Brice proved unbeatable over the hard course, just edging out Tom Swindlehurst and Darren’s son Cameron.

The Northern Centre has agreed to make a positive effort to attract C and D class riders with several clubs agreeing to include the class in selected events and Sedbergh are one of those who offered a conducted route for 8 riders. Toby Jackson won the Conducted C and George Dixon the Conducted D.

The three lap course looped high over the Batty’s land at Ghyll Farm with observers on the higher slopes really suffering in the bitter winds but were rewarded with amazing views of the South Lakeland fells.

The full results can be found under the Results link and Eric Kitchen’s pictures are in the Gallery.