Most riders in the Northern Centre will be aware that Nick Shield and Michael Irving are both riding in the Pre 65 Scottish AND the Scottish Six Days Trial in a few days time, as a charity duo to raise funds for the Make-A-Wish children’s Charity in memory of Nick’s wife Diane who passed away some 16 months ago after a heroic fight against cancer. 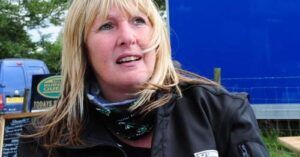 Diane, as most will remember her

Thanks to the donations already made, Nick and Michael are well on the way to meeting their initial target of £5000, and now, with the two trials nearly upon us is a good time to remind everybody that they can make a donation through the Just Giving system or personally of course.

Both guys have been out in recent weeks on both Pre 65 and modern machinery honing their talents and debugging the machines to ensure that they get to the finish of both trials. Diane would have been the first to cheer them on their way, but unfortunately that’s not to be, however, a donation will go a long way to help others, particularly children of which Diane was especially fond