Emma’s the star of Bowston 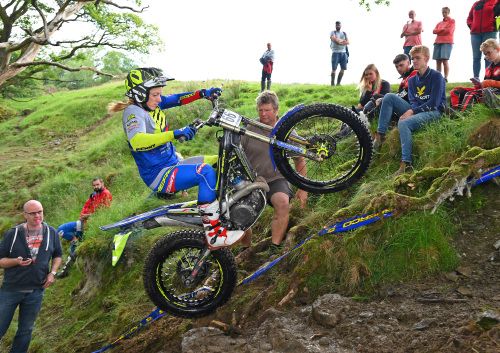 Emma’s the star of Bowston

After several false starts, the Westmorland Club’s round of the Wulfsport ACU Trial GB Championship round – the fourth this year – finally happened on July 11 with  72 starters and a decent spectator attendance out to enjoy the spectacle of a great day of action  from the UK’s very best riders at Ghyll Farm, Bowston.

A damp start that made parking  in the main field and the spectator field somewhat of a lottery failed to put a damper on the day as it quickly dried up, and the sections wore in from being very slippery early on, which enabled the riders to give of their very best.

A glance at the final results shows that for the best, the trial was not too difficult, but as is the case so often in this challenging sport, the difference between the best and the also rans is vast, and it’s no different at British Championship level than it is at club level.

What made this particular trial so special was to witness a group of riders who not only excel at national level, but do so at international, world championship level as well. Of the four classes, Trial GB, Trial 2, Trial 125 and Trial Expert, the top spots in three of the classes were taken by riders who currently head up similar positions at world level.

Perhaps the most surprising ride and to just about everybody at the trial the most satisfying, was the  Trial Expert result in which current Ladies World Champion Emma Bristow won the class by two marks, which was her first ever British Championship class win outside of a ladies only trial. Quite simply, to win against all the men, was a fantastic achievement, and one that has never before been accomplished in our sport.

Emma received much applause and many plaudits on the day, particularly from the other riders who were only too pleased to congratulate her on her superb win.

Riding the same sections as the Trial Expert riders were the Trial 125 riders and once again it was Harry Hemingway who totally dominated. The 15 year old not only blitzed the class he did so by a massive winning margin, less than half the score recorded by the runner up, Harry Turner, whilst once again it was George Hemingway, just 13 years old and riding this series with special dispensation who was third.

Former Trial GB rider Andy Chilton won Trial 2 class in a most demonstrative manner from first round winner Alexz Wigg; the Trial 2 riders riding some of the Trial GB sections to give them that but of an extra challenge.

Unfortunately there were only four competitors in the Trial GB class as Dan Peace, the elder of the two Peace brothers had to withdraw his entry the previous day due to an injured elbow, which left his younger brother Jack to uphold family honour which he did by finishing two marks in front of series leader Toby Martin. Together with defending champion Iwan Roberts and Billy Green, the four GB class riders put on a fantastic display of riding over some very difficult sections to entertain the enthusiastic spectators.

The lead picture is Emma Bristow, the 6 time Ladies World Champion and winner of Trial Expert .

Full results can be found on the Results page.