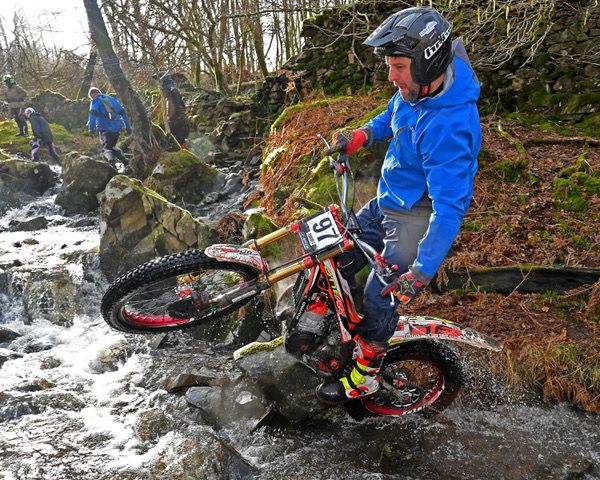 The Barrow Club’s Frank Jackson trial has always been a popular trial in the Northern Centre, but this year eclipsed the entry levels of previous years with  116 riders entered, yet 12 of those were non-starters who never informed the club in advance of their intentions, leaving 102 riders to tackle the road based course of 32 sections.

Fortunately, the weather proved to be cold and dry until the last half hour or so when a heavy hail and sleet storm hit the area from where the trial started at the Old Railway Line, Torver. But by then, most riders were on their way home except of course for the usual hard course lads hanging around at the back of the trial. 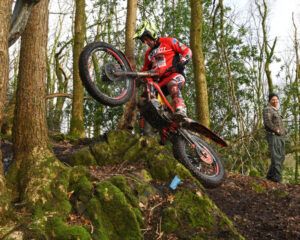 And best of those hard course riders was Tom Swindlehurst who took the scalps of former Centre Champions Steve Dixon and Darren Brice. The winner’s score of 19 was a clear cut victory over Dixon on 25 and Brice on 26. In fourth was Richard Gaskell who was on the same number of marks as Cameron Brice but got the nod on the furthest clean tie-breaker after both riders had the same number of cleans, dabs, threes and fives with the decision coming on section 14 where the younger Brice lost a mark as the more experienced Gaskell went clean.

When Robert Shuttleworth enters an event in the Green course, a 50/50 mix of hard and clubman sections, it’s a good rider who will beat him, but not last Sunday, the first weekend of February as he again came out top by two marks over Michael Irving who won the most cleans tie-decider from Sam Atherton, making a rare visit to Cumbria from his usual hunting ground of the Peak District – one National Park to another!

And when it comes to considering the Clubman results, two twin-shocks in the first three separated by arguably the worst “modern” bike, a four stroke Sherco, was a result that could have attracted tremendous odds if betting were part of the sport. 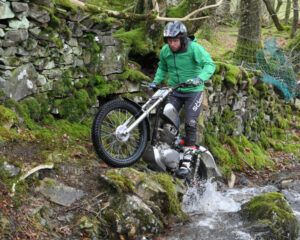 Riding a very tidy but nevertheless very large and unwieldy 250 BSA, Joel Gowan was the clubman class winner on a very low and impressive score of just 11, with Tom Bennett on the Sherco thumper next followed by Rob Bowyer on his 350 Triumph twin. All three are of course excellent riders, and most of their rivals would consider their choice of machines to be a handicap, but class never fails and on Sunday the three proved their ability to coax less competitive machines to some success.

Viewing the results, picking out some good results is never easy as so many things can happen in these Northern Championship rounds, but James Postlethwaite continues to improve; Pete McCanna (4th Clubman and best Over 50) and his son James McCanna (4th Green Course) showed that there’s some talent in the family, whilst Mike McNiven from Scotland and Bretton King from the Western Centre, both made the choice to travel some distance for good rides in a good trial.

The full results can be found from the Home Page Results link whilst another great selection of Kitch pics are in the Gallery.