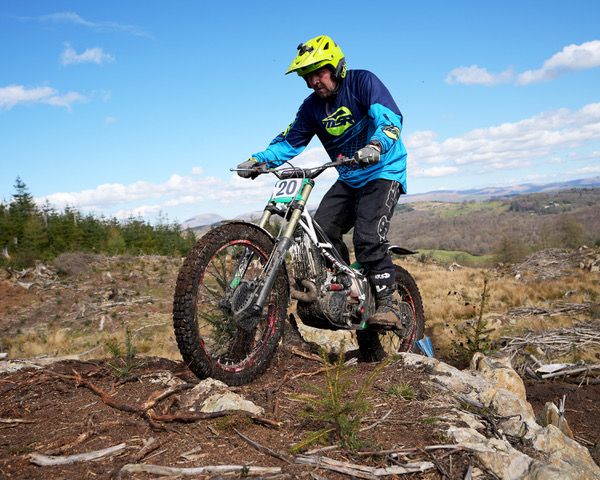 Northern Centre championship trials can be relatively low scoring events much of the time, but occasionally a tough one proves the opposite, and that was certainly the case with the Barrow Club’s D.R.Burrow trial held in Graythwaite Forest on the last Sunday of March.

The forest has been heavily felled in recent years and has also lost many trees due to the winter storms, meaning that much of the previously accessible stream sections have been lost to the event, it not permanently, certainly temporarily.

Leaving a landscape of felled trees and exposed rock outcrops reduced the availability of much variety of sections with some significant steps featuring with the result that the winning scores in two of the three classes were much greater than is the norm. 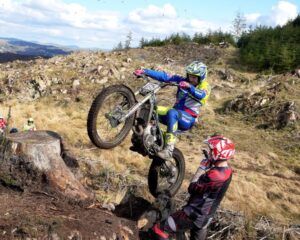 The Hard and Green course riders certainly had a tough day with the defending Centre Champion Tom Swindlehurst revelling in the conditions to win his class with the loss of 63 marks whilst second place and third place were fought over with the loss of 75 marks by both riders, Cameron Brice and Stephen Dixon, with the results being decided on the greater number of cleans. 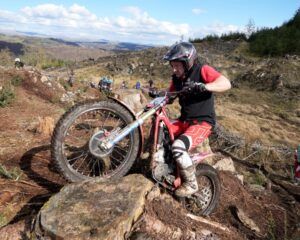 Robert Shuttleworth can always be relied upon to put in a good ride in the Green course and it was no exception in this event for he finished on 42 marks lost  which was 28 marks fewer than Stuart Gaskell lost and he can also be expected to challenge for Green course wins, but this time Shuttleworth was very much in a class of his own on the day. Andy Payne, a rider relatively fresh to the sport certainly knows how to ride and he took third, finishing well ahead of his brother Ian in seventh.

But if the scores were high over the Hard and Green courses, the Clubman winner, Patrick Edwards (our lead picture) was miserly with his loss over the four laps of 11 sections. He dropped just 10 marks which made the Clubman trial look relatively easy until the runner-up score is taken into account which was the 59 penalties lost by both Antony Brockbank and also Anthony Hayhurst, with again, the placings decided on the most cleans tie decider.

Most of the entry were from either the Northern or North Western centres, but Midlander Derrick Edmondson made his journey worthwhile by riding the previous day’s national Bemrose trial before continuing further north for the D.R.Burrow.His  scores for the two trials varied by 53 marks, with the Barrow trial the harder of the two. Derrick, a member of the famous Edmondson family is no stranger to tough events having finished second overall to the late, great Gilles Lalay in the International Six Days Enduro, having also been a competitor in the Dakar Rally and a British Enduro Champion and member of the British ISDE Trophy team, so a tough Northern Centre trial came as second nature. “Perhaps a 63 year old riding a 40 year old bike (a Honda TLR) isn’t a good idea” he said but determination shone through as he took ninth in the Clubman category.

Inevitably there were a number of retirements in a trial of such severity, but even so 58 of the  67 starters finished and bike problems were the retirement reasons for some of those who failed to complete the course.

The full results can be found by clicking on the results link on the home page and Kitch pics will appear on Tuesday morning in the Gallery.