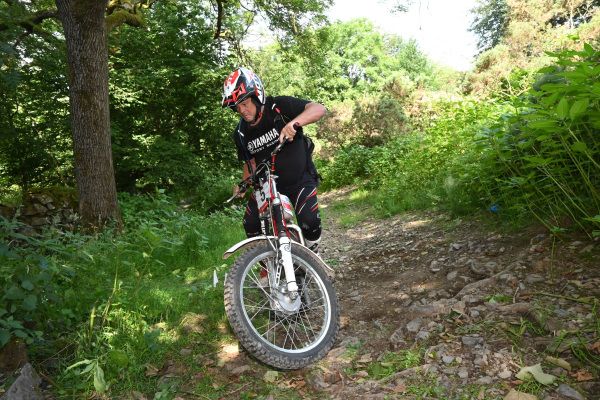 Hot weather (that’s a change) hit the heights at Holmescales on July 18  when the Lakes Grass Track Racing Club ran a  round of their GS Motorcycles sponsored series which attracted a huge entry of 70 riders.

Aimed primarily at riders preferring an easier trial, only two riders, Stephen Dixon and Peter Blowers went clean through the four laps 12 sections, and whilst Centre Champion Dixon would be expected to go clean, it was a fine achievement for Blowers, a regular centre rider, who had one of his best ever rides.

But the day was not about going clean, it was all about providing a trial for the lesser lights within the sport who need  such trials to boost their confidence.

There were three routes through the sections, just six riders chose to tackle the hard route, won by Cameron Brice on 3 from Harry Towler on 10 whilst the Hazlett brothers from Casterton nabbed third and fifth places on their Vertigos. 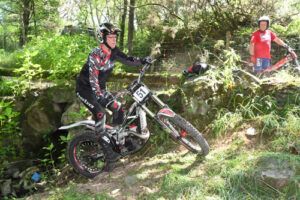 Thirty-two riders tackled the normal clubman course where the scores were generally low as intended but it was good to see that  22 riders entered for the easy course, meaning that the trial dragged out a large number of riders who may otherwise not have ridden. Tony Bleasdale on a 175 Yamaha twinshock lost just one mark to win from Damian Morey on two.

The trial was also a round of the Northern Centre Championship for C and D class youths, the two groups being topped by Cameron Batty and Lily Perie.

The results are on the Results Page, (be patient, let them upload) later this week due to other commitments by the club’s officials, and apologies if they are difficult to read but they have been dragged off Facebook and are of a low resolution. It’s always better to e-mail them directly to rapley47@outlook.com.

The featured image is of Tony Bleasdale winner of the Easy Course.

Emma's the star of Bowston