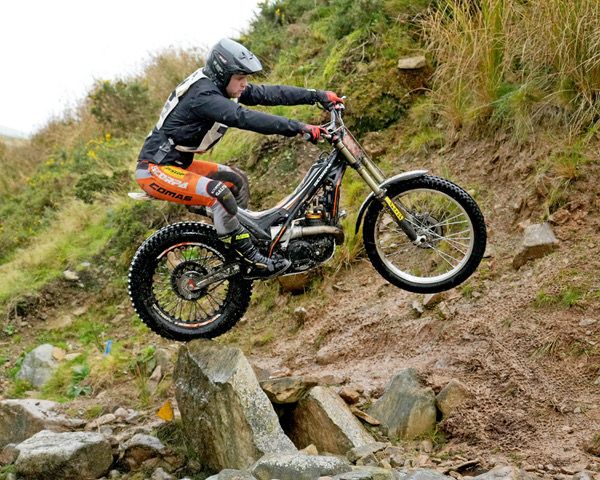 Now with Kitch Pics in the Gallery

The results from the Lakes Two Day Trial on October 9/10 are now available for viewing in the Results section of this site, but due to the size of the spreadsheet, they can only be viewed as separate sheets.

However, try these below if it helps, click on them.

With a massive entry of 182 riders, the small Cumbrian town of Broughton-in-Furness was inundated over the weekend of October 9/10 with trials riders from all over the country with plans to ride the iconic Lakes Two Day Trial organised by the consortium of clubs known as the Lakes Motor Trial Association.

They were in for a tough opening day for the weather had closed in with low cloud and persistent drizzle the order of the day on Corney Fell, Fell Green and Black Combe, all of which combined to make the day one of the toughest in many years. It’s never an easy day one in the Lakes, but this year’s was undoubtedly  one of the toughest of recent years. 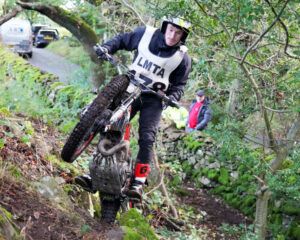 But it’s always been like that, right back to the opening years of the trials when Billy Birkett was the kingpin in the organising committee. He didn’t suffer fools gladly and no trial Billy put on was ever going to be easy, so those who declared it all too arduous might like to hark back to the twinshock days.

Scores were certainly high for the majority, but the top men – as usual – always seem to master the conditions come what may and the two class leaders after the opening day, Richard Sadler and Steve Dixon were in single figure scores; Sadler on 9 and Dixon on a measley 4 with Richard Gaskell on 7 and Steve Saunders  on 12 (Yes, THAT Steve Saunders and 7 marks of his total were on time). Sadler was way ahead of his nearest rival who was James Fry on 20, then Tom Minta on 21 with Andy Chilton close behind on 22. 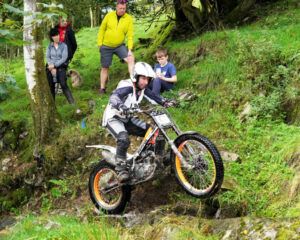 The seven hour time limit was always going to be tight despite there only being 36 sections on Saturday for reasons that were obvious – tough terrain, hard sections, punch card observing and big queues which meant that there were a lot of time penalties.

However, day two was altogether a different package on offer. The sun shone and the trial was immeasurably easier with the scores quite low in comparison to those lost by many riders on Saturday. But for some riders, the damage had already been done and 15 day one finishers decided not to tackle day two.

They missed a good trial which was totally road based with very little arduous terrain to be tackled outside of the sections. 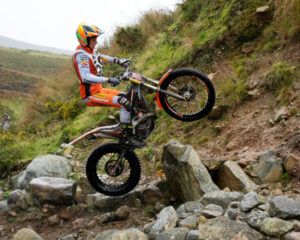 On the National course both Sadler and Minta lost just three marks and Chilton swapped places in the final total with Fry, the top four finishing on 76 sections scores of  12, 24, 28 and 36 for Sadler, Minta, Chilton and Fry.

On the Clubman course the final result was Dixon on 10, riding his dad’s ancient Yamaha TY250 Mono, Gaskell on 14, Saunders on 17 and Robert Shuttleworth on 20. And it should be noted that were it not for Saunders having lost seven on time, then he would have tied with Dixon for the win, and who knows who would have clinched the most cleans tie breaker. The multiple British Champion and former World number 2 has not lost his feet up talent.