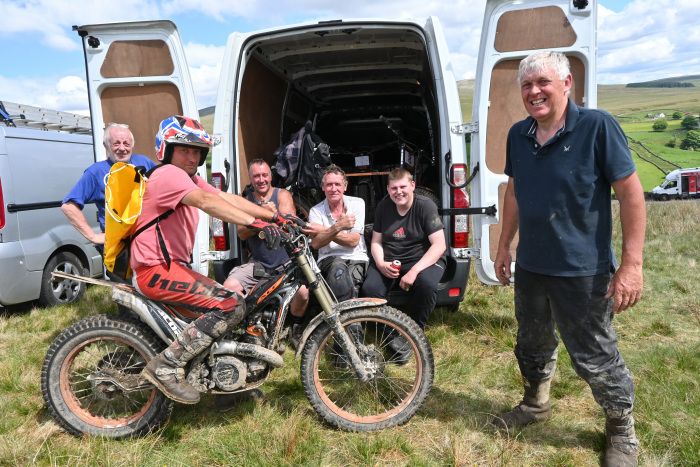 Some 38 years ago, back in 1983, the Sedbergh and District Motor Club quietly folded after running trials for around five years. They were fortunate to hold their trials on the Howgill fells, but like so many things in life, times change, people have less time and interests move on.

Yet, the status of the club as an organiser never diminished and just a couple of months ago, several Northern Centre enthusiasts undertook the plan to resurreect the club and were warmly welcomed back by both ACU head office the local Northern Centre and also Storth Machinery, slurry equipment manufacturers, who with former rider Alan Looker as the boss, was more than happy to help the new club by way of funding equipmet purchases, so necessary for a new organisation yet to earn any club funds.

On Sunday June 6, they ran their first trial, courtesy of the Cumberland County MCC who released their regular date in order that Sedbergh could promote their first trial back. And they  attracted a decent entry of 72 riders, most on the clubman course and  just over a dozen on the hard course.

The venue was Murthwaite, and the permission came from Brian Capstick who is dead keen to encourage sport within the area and it proved to be a excellent venue – though perhaps not a place to be on a wet day for the hillsides were incredibly steep and ascending and descending in conditions very different from the summer sunshine on June 6 would be mighty hazardous.

Cameron Brice and Tom Swindlehurst had a hard fought battle to claim the hard course victory which went to Brice, both riders planning to contest this year’s Wulfsport ACU GB British Championship series. Three marks separated them with third placed Owen Gilchrist some way behind.

Chris Garlick on his monster Enfield.

On the Clubman course Andrew Hackett riding a “modern” bike just managed to finish one mark ahead of Chris Garlick on a very big, and presumably heavy 500 Royal Enfield of late ‘fifties vintage. Chris is a big, strong guy and his ability to flick turn the Enfield out of Dave Seales’ section three certainly made the observer’s day. Lewis Johnson campaigned a RTL Honda into third place. 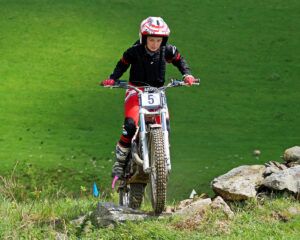 Only a few chose to ride the dead easy course but that was still quite challenging and it was Sam Quinn, son of regular North Eastern rider Glen who won the class. Machine troubles afflicted a few of the other Easy course riders.

There’s no doubt the event was challenging and very different to what would normally be expected in a Cumbrian trial and the views from the high point of the Howgills certainly made the day worthwhile.

The full results are in the Results section of the website and there’s more pictures from Eric Kitchen in the gallery.