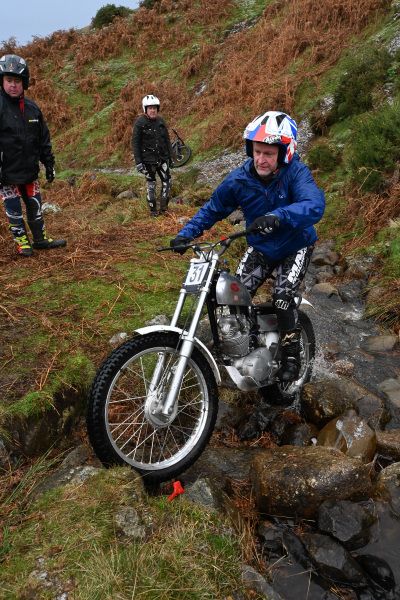 With three classes challenging for honours, the action should have been red hot at the Bootle Club’s Rockshock Classic Trials Championship round on Fell Green, Bootle on the last Sunday of November, but any red hot action was tempered by the weather which was bitterly cold with sleet followed by rain followed by sunshine which failed to warm up the  air!

Unfortunately the 124 strong entry was reduced by non-starters who failed to attend, but even so 100 lads and a lass took to two laps of 20 sections over the challenging terrain.

The entry certainly featured a quality line up and it was Miles Jones who was the stand out performer, winning the British Bike Pre 65 Expert category by a significant margin from everybody else in the trial. The 32 year old from Flintshire lost just 2 marks, whilst the next best Expert riders was his namesake Matt Jones who was the best Pre 1986 Twinshock rider whilst the best  Air-Cooled mounted rider was aboard a Fantic ridden by Chris Garlick. Matt Jones was on 6 and Garlick on 13.

Scott Cameron (Twinshock Expert) looked to be the rider who might deprive Miles Jones of the overall win with the loss of 8 marks, but he rued the five he had incurred for going the wrong side of a marker flag whilst managing the rest of the section feet up.