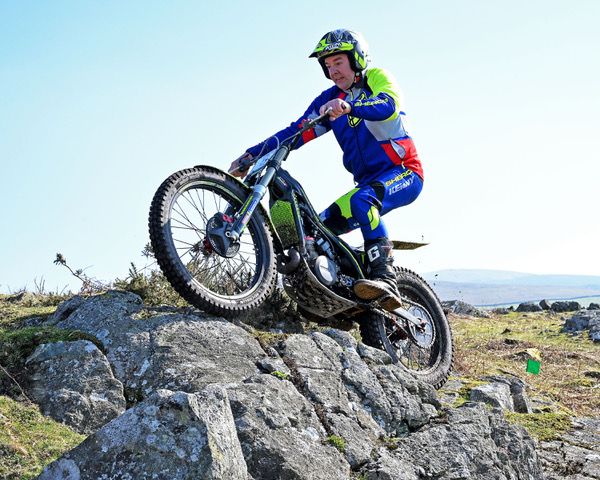 With sun striking the  bronzed, bracken covered land at Fell Green, 40 riders took part in the Gowan Construction multiclass trial where James Postlethwaite and Craig Seward both lost the same number of marks over the hard course, Possy getting the nod with the greater number of cleans in his loss of 9 over Sewey. Steve Dixon was third just two marks further adrift and it was Steve’s son Jack who topped the Green course with a comfortable 8 mark win over Jonny Clark, those two being well ahead of Edward Roe.

Riding number 8, Antony Brockbank (featured picture) lost just 8 marks to win the Clubman class by a healthy 12 mark advantage over Peter Clibburn with the older of the two Seward brothers, Kevin in third.

Four laps of the ten section course was the usual offering at Fell Green with the trial featuring the usual mix of rock outcrop and short climbs. A Beginners class was included but only attracted 3 entries of which Michael Capstick was the best on 41 from Robert Derbyshire and Chris Derbyshire on 45 and 47 respectively.

The full results are under the Results heading on the home page and Eric Kitchen’s pictures are in the Gallery, again linked from the home page.