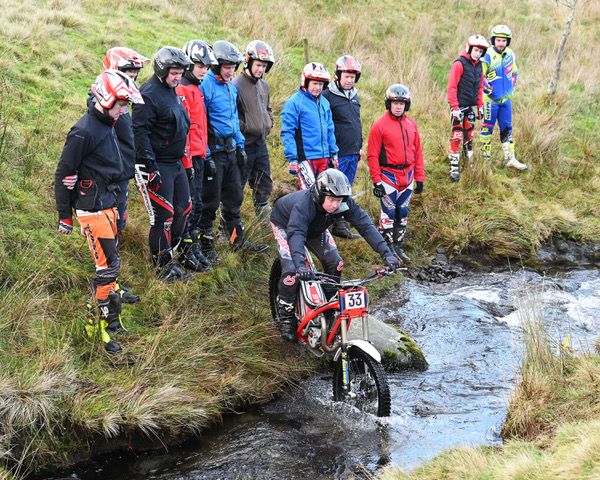 Round 3 of the 2022 Northern Centre Trials Championship was the Turner Trophy trial hosted by the Bassenthwaite Club on the wild and woolly Uldale Fells near Caldbeck where 77 riders had entered for four laps of the testing moorland course of ten sections.

Riders were definitely looking weary by the time they reached the final section at the end of the day, a steep, narrrow gully that had plenty of grip but nevertheless took marks all day from the bulk of the entry.

Tom Swindlehurst, the defending Centre Champion took the hard course  win by four marks from the 16 time champion Stephen Dixon, a battle that looks set to rage throughout the year whilst Richard Gaskell lost out on the runner up place by virtue of the most cleans tie-breaker rule.

Equally competitive is the Green course, a mix of clubman and hard course sections and it was a tie on 20 marks lost between Stuart Gaskell who achieved more cleans than Michael Irving with Nick Shield third and Mike McNiven fourth from the group of 24 riders who rode the route.

Back in the summer of 2021 Neil Wilson returned to the sport after a lay off of a few years and he showed that the break hadn’t affected his riding as he won the Clubman class of the trial held on January 2, though again it was the tie breaker that made the difference as Trevor Fawkes lost the same number of marks whilst Bretton King, all the way from Marlborough in Wiltshire, specifically for the trial, finished in a fine third place.

Section ten has been used for trials by the Bassenthwaite club for many, many years and it never alters much. It remains short, sharp, steep and with a decent cascade of water flowing down and is good for taking marks from everyone. Well not quite as the shortened version used by the Clubmen and Green course riders saw only three riders clean it every time, (Nick Shield, Andrew Payne and Stuart Gaskell) whilst Tom Swindlehurst had the sole clean of the harder version though numerous riders managed the tight step at the end for a dab.

Full results (give them time to load!!) are on the Results link from the Home page and pictures in the gallery are of course by Eric Kitchen.