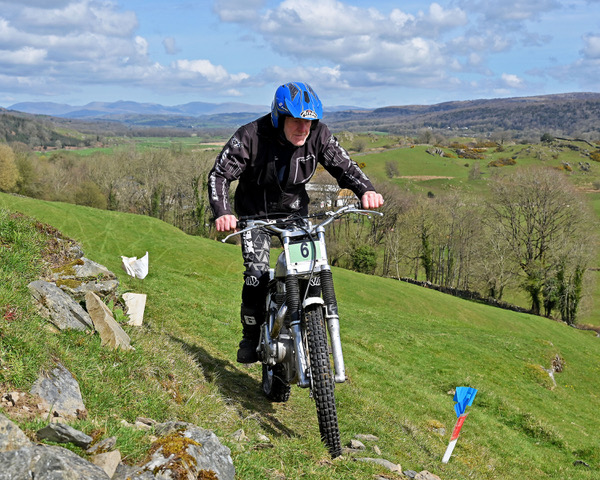 Take a glorious April day, a grand 64 acres of hillside and 60 riders on trials bikes and there’s a perfect recipe for a good day of bike sport.

That’s what the Westmorland Club mixed up last Sunday, April 10, for the club’s first Clubman Easy trial of the year which was held on the club’s own land, purchased in the early part of the century at Lindale.

Being a club that organises major national trials, including a round in each of the premier championships of the year, together with a National Championship hillclimb (Barbon on July 23) and a couple of classic scrambles (the first on April 23/24 at the Westmorland County Showground), not to mention Centre Championship trials, the club considers it equally important that riders who prefer easy events are also catered for – and that was the offering at Lindale. 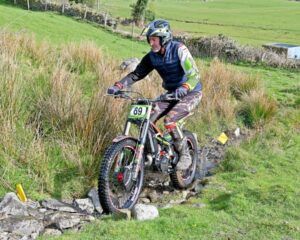 The section plotters decided on a different outlook at the venue, opting to go for an anti-clockwise loop for the four laps of 10 sections, which provided new hazards not previously ridden and whilst the anticipated winning scores were low, not everybody can manage to be in that position, so the course had to be planned for those who were likely to lose a lot of marks.

In the end the winning scores were two marks by Andrew Southward on the main route and one mark by Colin Benson over the easier course. Dan Maguire and Peter Clibburn both lost 3 marks on the main course to share the runner up spot with Ian Holgate next on four as he shepherded round the mother and daughter duo of Anne and Leana Titley. 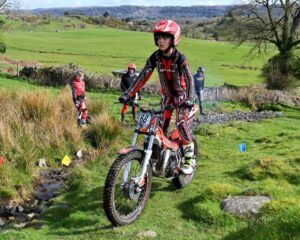 Back on a trials bike for the first time in 15 years, Michael Barton lost only 2 marks to finish runner up to Benson over the easy route with Gary Rushton next on 5. But not everybody managed such a low score so with little Jonathan Smith losing 120, but still doing all the sections under the protection of his dad, also Johnathan, that’s the wide range of abilities the trial needed to be aimed at.

So there’s no doubt it was a popular event with loads of comments on social media on Monday morning thanking the club and the full house of observers who helped make the trial go so smoothly.

The results for this trial are now under the Results link from the top of the Home Page. Kitch pics appear in the Gallery.