There’s a saying that with every new bike you get a box of cleans, well Nick Shield used his box completely on July 25 as he won first time out on his new TRS with a zero loss of marks at Cumberland County’s Velocette Cup trial at Roughton Ghyll, Fellside near Caldbeck.

This remote Cumbrian valley has hosted trials by Cumberland County for decades thanks to the generosity of the local community and the Lake District National Park and as one rider said, “what a fantastic place to ride for just £15 – and legally” A fair comment on a amazing piece of land where the organisers had plotted four laps of the ten sections in the slippery streams. 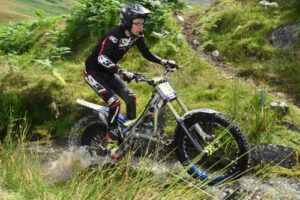 Intended to be on the easy side, never the less it’s not easy to go clean at any trial, but that was the achievement by the winner and something that none of the other 54 entries could achieve. However Stuart Gaskell and Steve Stamper did their best and only lost one mark but then it was a small jump to the four marks lost by Barrow secretary Angus Jenkinson. 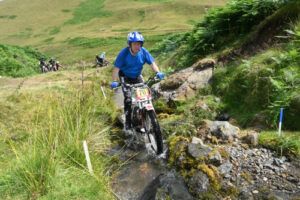 On the easy route the loss of marks was higher with Darren Fowler best on 15 followed by Steven Wilson and then Craig Asbridge on a day when the sun shone in a blessed valley where the sport is so privileged to be able to ride.

The full results are on the Results page of this website.