The first of the Northern Centre’s evening trials attracted a healthy entry of 49 entries and was held in conditions diametrically opposite to those experienced at the same venue back in February. Then the conditions were worse than awful with driving rain and high winds with the river in flood, last Wednesday the sun shone, the sky was blue and for the first two laps at least it was blisteringly hot.

Riding his 250 BSA, Gowan managed to finish just one mark ahead of Dan Gaskell with Jack Dixon on his Dad’s 175 Yamaha Whitehawk in third place while his father managed a spell of observing one of the ten sections that were ridden four times at this delightful Lakeland venue.

The loss of marks proved to be relatively high for an evening trial as the predominately rocky sections became more slippery as the evening passed, the passage of muddy wheels leaving a coating of slime that at times defied the finding of grip. None of the sections were anything other than sensible, just tricky takers of marks. 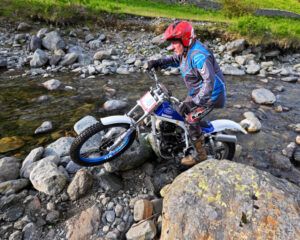 There was also an easy course through all the sections bar one, and it was on the section five that was ridden by both categories that the easy course winner Mike Rapley on his TLR 200 lost all his marks bar one. His loss of nine came with a clean, one, five and three whilst his other single dab was on the opening section on the opening lap about two yards into the hazard.

Runner up just a mark adrift was Ephy Wilson with Trevor Johnston in third on 17. Colin Benson, like Rapley, a grizzled veteran of many years trials riding chuffed his Ariel round the four laps for fifth place on the easy course.

Next Barrow Trial is open