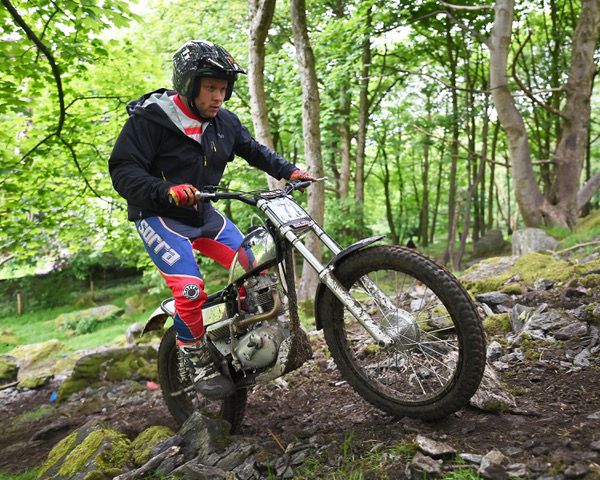 Many times it has been suggested (by those who should know better) that any rider who sets out a course gets an unfair advantage as they set the sections to suit themselves or their familiarity with the course gives them an unfair advantage.

The reality of course is that no matter how much of the course plotting a rider may have done, at the end of the day, the rider still has to ride the course, is still penalised by the observer’s interpretation of their loss and is still under the pressure of competition.

Even taking all the above into consideration, when such a rider completes the course with the loss of seven marks whilst his nearest rivals lose 34, 43 and 50, no amount of familiarity can give a rider who has set out the trial that amount of an advantage – unless of course the rider has  a skill level  that much higher than his competitors.

And that was the case at the Bootle Club’s recent Gowan Construction trial at Po House where Joel Gowan, who only three weeks earlier had finished second in the Pre 65 Scottish, completed the four laps of the ten sections he had plotted to finish on seven, with Simon Brice on 34, Antony Brockbank on 43 and Jonny Wren on 50.

And the story doesn’t quite end there as Gowan scored his win on his 250 BSA, whilst his three closest rivals were on the latest machinery. The 25 year old is certainly a talent on his barking Beeza and he was obviously rather pleased with his ride over the West Cumbrian course, unused for trials since 2018.

The 45 strong entry in general found the course testing with several failing to finish and not unexpectedly it was Robert Shuttleworth who won the Green course,  with the loss of 40 from Harry Towler on 56 with the two Peters, Mawson and Huddleston completing the group of four who tackled the 50/50 route.

Whilst the Clubman and Green route winners were comfortably ahead of their rivals, it was a much closer result over the Hard course where Tom Swindlehurst finished just one mark fewer than Cameron Brice, 19 to 20, with father Darren further adrift on 22.

A mix of showers and dry spells did make some sections change as the trial progressed and whilst some found the day tougher than they wanted, others enjoyed the challenge.

The results are under the Results link on the Home page with Kitch pics in the gallery.

Take your pick for June