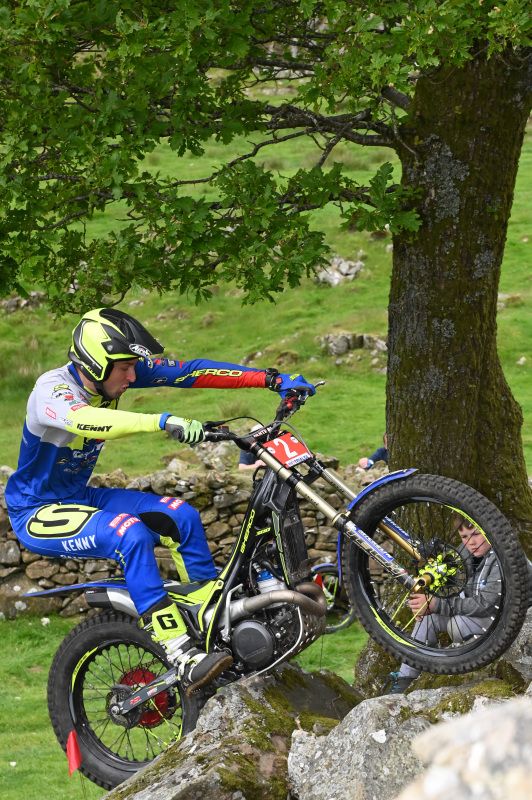 Jack Peace (lead picture – Sherco) has edged out a clear lead in the Trial GB class following the third round of the series at Westmorland’s Lakeland Trial, the third round of the series, held at Haveriggholme near Torver. In a relatively low scoring event, both Peace and Toby Martyn (TRRS) were locked in combat, but two failures in the first three sections on the final tour of the event dropped the Cornishman to third with Dan Peace (Sherco) taking over the second spot which he held to the end. 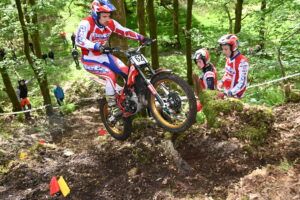 George Gosden (above – Beta) recorded his maiden win in the Trial Expert class with a convincing win by twelve marks over class leader, Dan Thorpe (GasGas) and Emma Bristow (Sherco). Gosden’s loss of just twenty marks was aided by a brilliant second lap for a miserly two dabs.
However, it was very tight at the top of the Trial 2 class with Iwan Roberts (TRRS) taking the tie break from Harry Hemingway (Beta). Both lost fifteen marks, but the Welshman got the nod by virtue of one more “one” mark than his rival. A one off ride by Andy Chilton (Scorpa) gained him third position which aided Roberts championship lead.
George Hemingway (Beta), Jamie Galloway (TRRS) and Alfie Lampkin (Vertigo) repeated the first two round results as the series resumes in Yorkshire next weekend.

George Hemingway (Beta) continued his unbeaten run in the Trial 125 class with a win in the Lakeland Trial held yesterday in the fells above Torver. The Beta UK rider established an early lead in the three lap, twelve section event which consisted of some slippery climbs in the lower woods, before six rocky zones on the open fells.
Shedding just seven marks on the opening lap was enough to give the young Yorkshire lad the best lap bonus point and was half the score of his nearest rival at this point, Alfie Lampkin (Vertigo) with Jamie Galloway ( TRRS) down in third on twenty marks.
With many of the sections spinning up which meant that grip was more difficult to find, Galloway, who had been sick leading up to the event and feared he may not be able to compete, improved as the day wore on and a final lap score of eight was enough to edge Lampkin into third.
Riding with new found maturity and confidence, Lampkin, talked through most of the sections by his ex multiple World Champion father Dougie, made many calculated rides and minimised his failures to just two over the thirty six sections during the day.
In the battle for the lower – but important championship point scoring positions – Jay Pyper’s (Beta) first lap advantage enabled him to hold onto fourth spot after a day long battle with Finlay Rule (Scorpa), whilst Daniel Da Breo (GasGas) had a second lap which matched his main rivals to show they should not discount him in the remaining rounds.

With a display which amazed his main rivals, Isle of Wight’s George Gosden (Beta UK) scored an outstanding win in the Expert class at the Lakeland Trial  which hoists him right into the championship battle after three rounds.
Running one mark behind eventual second and third place finishers, Dan Thorpe (GasGas) and Emma Bristow (Sherco) at the end of the first lap of the event, Gosden moved up a gear on the second circuit of the race high above Torver and shed just two marks, whilst Thorpe and Bristow also improved dramatically with laps of five and six.
However, by his own admission Thorpe could not keep his feet up on the final lap, whilst Queen Emma double her score, but Gosden stayed focused and added a further five singles to finish twelve marks in front.
Tyler Rendall (Vertigo) returned his best ride of the season to finish a solid fourth with just one maximum throughout the day, whilst Tom Swindlehurst (Sherco) had three very consistent laps for fifth which maintains his solid rides in all three rounds to date.
Charlie Smith (Vertigo) opened his day with his only failure on the very first section but recovered well and returned three consistent laps for sixth, which put him ahead of Brad Bullock (Beta) who suffered three of his four failures on lap three.
John Sunter (Montesa) put in his best ride of the series to date with eighth whilst Danny Gamble (TRRS) was right on the pace on lap one before slipping down to ninth, with Brett Harbud (Beta) making a welcome return to a top ten position.