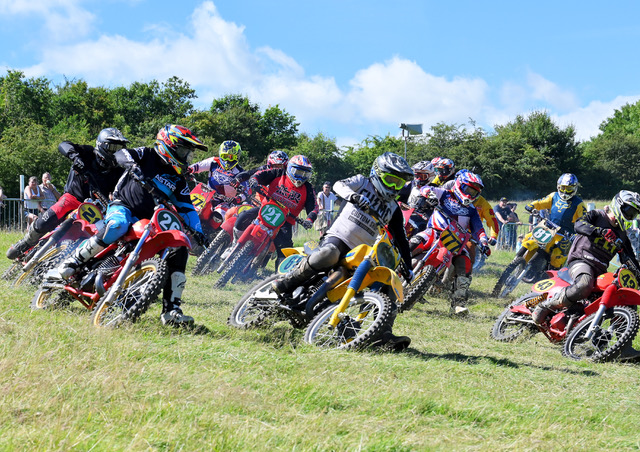 Pictures Eric Kitchen (in the Gallery)

What better place was there to be last Sunday than the famous old circuit at Helsington, on the outskirts of Kendal on the very edge of the Lake District, where the Westmorland Motor Club returned after 51 years away, to run the Taylor Trophy Scramble. The club had been trying to get the land for the scramble for the last four years, and it was thanks to Tony Barnes, Paul Capstick and the land owners Levens Hall Estate, that it all came together, giving us all a very special event that drew a huge crowd in, and was sponsored by Taylors Fun Fairs, one of the original club supporters as far back as the 1950’s, with Linda Taylor there handing out the awards.

Coniston Brewery even sponsored the riders with the obligatory bottle of Bluebird Bitter at the presentation.

The club produced a superb programme, with a full insert of the 1962 event, and had commemorative shirts and caps printed for the occasion. The track itself was as near to the original as possible, just missing out the famous water splash due to environmental reasons, but the full grassland track was approximately a mile long and made for some tremendous racing. There was even a parade lap which saw some wonderful machines take part, with the famous Flying Saucer, Zeke Myers old 1940’s bike, and Alan Clough and Sid Lampkin getting the leg over to ride the old circuit once more. 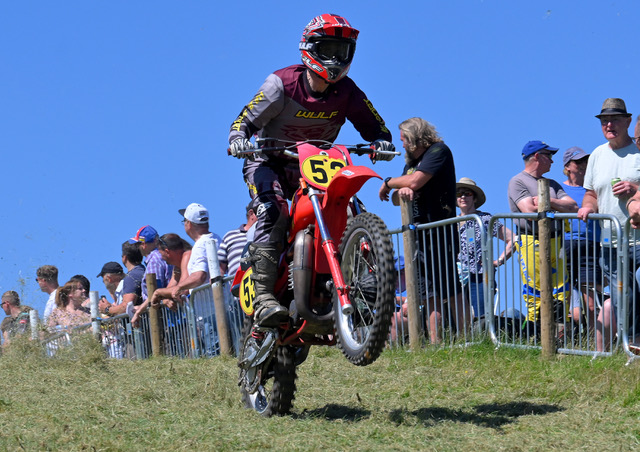 Greg Speed travelled all the way from Wellingborough and was the man to beat in the Classic classes, and took five wins, including the Fastest 36 race. Mind you he had some competition as track designer Jonathan Bethell got the better of him on more than one occasion, trying to chase him down in the Fastest 36 race. Liston Bell won race two, and Simon Chell on his Pre 60 machine had three great rides. It was great to see former Northern Centre Champion John Leece back in the fray on his Bultaco also going well. Kenny Harper took the Pre 65 class on his CZ keeping up with the bigger bikes.

Graham Riley came out on top of his battle with Brad O’Leary in the Twinshock Under 50’s as the two Maicos produced amazing speed on the 40-year-old bikes. Graham also came out victorious in the Fastest 36 race, with runner up Paul Johnston down from Scotland.

Martin Stokes won all three of the Twinshock 125 races, with Simon Edmonds in second and Craig Preson in third. Club member Ryan Ireland did the same in the Twinshock 250 class with three wins, and Ewan Johnston, making his Twinshock debut on a Wulfsport Maico took second, with Shaun Muir and David Wood battling for third. 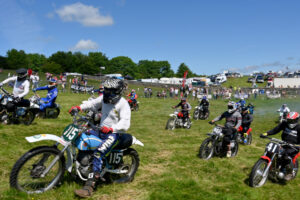 In the Pre 75 over 250’s there was a six-way battle for the wins, with Greg Speed winning two and Jonathan Bethell winning the other, with notable rides by John Littler, Keith Barnes, Tony Barnes, Anthony Barnes and Carl Hodgson.

Ian Stainton managed to beat David Lamb in the Non-Qualifiers, but all this was dwarfed by the final race of the day, the Handicap race, which all the crowd stayed for, and boy did it deliver. Brad O’Leary was the scratch rider away about three quarters of a lap behind front row man John Sinnett. We all watched Brad scythe his way through the field, and with a lap to go he was closing but was he going to do it. He seemed to put the after burners on and closed in on John as they approached the final two corners and managed to pass John on the uphill to the finish with the crowd loving it. Fair play to Mr Sinnett though who had his ten minutes of fame to close out a wonderful Sunday in the sun.