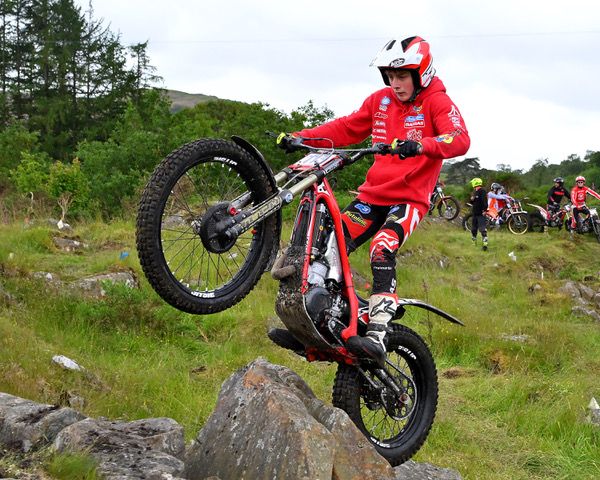 Two weeks previously the Old Railway Line at Torver had played host to the UK’s top riders for the third round of Trial GB, but on June 12 a more mundane event took place at the popular venue with the Barrow Club’s Henry Trial, a club trial which attracted an entry of 40 locals for three laps of 12 sections – the same format as Trial GB. 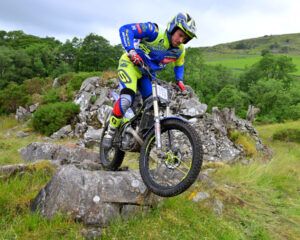 Tom Swindlehurst had another seven riders in the hard class determined to displace him from his regular perch but none came clear. The closest was James Postlethwaite who lost 18, exactly double Swinny’s winning score whilst in third place was James Johnson, both James’s having recently ridden in the SSDT with some impressive success.

Wilf Shuttleworth had moved himself up a class having progressed from the Youth Clubman category via the Green 50/50 route into the hard class and though he finished at the bottom of the pile, there’s no doubt he will rapidly move up as he had some good rides and  had no fear of the large steps that predominate at this venue in the hard class.

Wilf’s dad Robert is an almost certain winner of the Green course and that again proved to be the case with the loss of 8 marks from Sam Metcalfe on 17 and Matt Hopkinson next on 23. Their second section of the lap  proved to be the most difficult with only Hopkinson achieving three cleans.

Inevitably it was the Clubman class that attracted the largest entry and proved to be a fairly easy trial with winner Richard Taylor giving his 22 year old Montesa 315 a rare outing losing just two marks whilst Ben Hanson on his TRS on  3 and Danny Ralphs on 4 made up the top three placings.

The ever improving Lee Southam lost 11 but so did two other riders with Connor Anderson and Mark Quinn having more cleans than Lee and therefore finished ahead of him.

Full results are linked from the Home page Results heading as are Eric Kitchen’s pictures in the gallery.