It’s now 51 years since the famous scramble track at Helsington, Kendal was used for scramble meetings hosted by the Westmorland Club, and on July 10, the track will be the scene once again of classic scrambling with Westmorland promoting the Taylor Trophy scramble.
Whilst the venue has been out of use for over half a century, it went into disuse due to the construction of the Kendal by-pass which forced the club to move their meetings to another venue at Foulshaw. Since then, meetings have been held at various venues, but it’s Helsington that remains the  most famous of the venues the club has used, the first being back in the ‘forties.
Many famous scrambling names raced the undulating track which featured a stream crossing, and though the names who will race there on July 10 may not be as well known, no doubt the action will be just as fast and furious.
Entries are still being taken via THE EVENT app, and it won’t be long before the club members start setting up the track for action.
Spectators of course will be very welcome, indeed the Westmorland members are hoping that many of those youngsters who watched the last meeting in 1971, will also be viewing again in 2022 as older, experienced spectators.
The advertising boards around the local roads say that the meeting starts at 10.30 with practice, and admission is just £10 for what should be a great day of action.
Due to the scramble taking place the same day as the scheduled Kefty Watson Trial, that trial is now cancelled and the club hope to incorporate it into another event on a later date.
************* 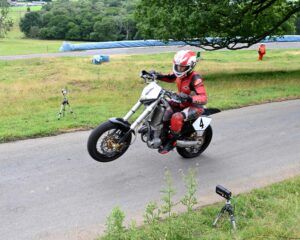 The famous Barbon Hillclimb for bikes, brilliantly organised by the Westmorland Club for many years, takes place again on SATURDAY, July 23, which is both a marvellous spectacle for both competitors and spectators at this great Lakeland venue, the 813 metre drive features two rapid bends, a fast straight and an entertaining hairpin bend.
Entries have been filling fast but will close on July 1 in order that the programme etc can be collated and printed in plenty of time for the event. So the message has to be, if you haven’t entered already, now is the time to do so!!  Entries are via the ACU on line system. This is a national hillclimb championship round.
On the day itself, spectators will be very welcome with practice starting from 9.30 with all competitors completing two practice runs prior to the competition itself starting after a suitable refreshment lunch break. The spectator admission charge is £10 including a comprehensive programme.
CATEGORY: News
No Comments
0 Likes

Another evening trial from Bassenthwaite.

Another cracker from West Cumbria